My grandmother Didinbhai passed away today around 10 years ago. She was one of the strongest and most dignified women I knew. She lost her husband at a young age and raised three daughters by herself. She considered her youngest brother in-law as her son and she was a big part of their family as well. In fact, my younger aunts and uncle are more like cousins to me. She never lost her dignity in the toughest of situations and never grew bitter in spite of whatever she went through. She would give away her things without hesitation or another thought as to how she would replace them. I once wore an old chiffon saree of hers with a silver lace border to school and unfortunately brought it back ripped. While my mother was furious, Didinbhai stopped her and nonchalantly said that it was the saree's good luck that her grand daughter wore it.
She was a voracious reader and very well informed about whatever was going on in the world around her. She was also a regular listener of the All India Radio and often times our mornings at her place would begin with the sound of the radio being turned on.
She also remains one of the best cooks I know! She would magically transform a handful of semolina into a delicious payesh literally in minutes or make the best khirpuriya to celebrate Joy's class results! Her chingri malaikari and bhapa chingri, through some mysterious magical process and an old aluminium pan, are the softest and most flavourful ones ever! She made an amazing fish pie to get all the young ones to eat up without complain! Her stuffed chicken murgh musallam inspired by an article by Nehru's Khansama was a hit with her sons in law. And the chicken a la Kiev she cooked by just listening to the description from Chhotka. And did I mention the amazing crab rice she made? I have never found another dish or a recipe to replace that.
Summer vacations at my mamarbari were always fun not just because of my didinbhai's cooking or the fun games with Joy or Mashum's kalojam ice cream but also the nights spent beside her in her huge bed. I remember stringing up her moshari, which was an adventure for me since we didn't have them at home and hearing a story or two or listening to her and ma chat about distant relatives.
The other thing I can never forget is the kalo knujo she used to keep water in and which had the best tasting, sweetest and perfectly cooled water I have ever tasted.
She was always ready to stand by anyone in need. Long before it was heard of, she made sure that the lady who worked for her had a bank account and she gave her a pension after she retired. She helped out so many people without anyone else's knowledge from her own meagre savings and whatever trusts and bonds my Dadu had saved. Yet, I never saw her being extravagant or lavish about herself. I can still feel the softness of the simple white cotton sarees she wore and the cool touch of the thin gold bangles in her hand as she would pet my cheek or hug me. 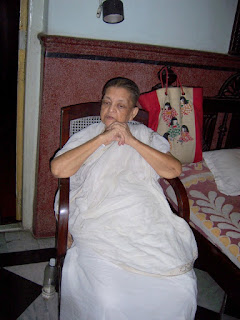 Doi Begun.
From Rukmadi's post. Saving it here since it's an awesome recipe!!

1) Slice the aubergines longitudinally as is in the picture.
Dunk the sliced pieces in a large bowl of water to which some turmeric powder and salt has been added. Let soak for about 10 minutes.
Take out and rinse thoroughly again under running water and put aside over a sieve so all the excess water can drain off.
2) Make a thick paste of salt-turmeric-chilli powder, mixed in mustard oil. Apply this generously over the sliced pieces of aubergines and let the aubergines rest for about 5/8 minutes.
3) Smoke MO in a pan and deep fry the aubergines till done. Remove with a slotted spoon and place on the plate in which you will be serving. Do not over load please.
4) Make a slurry of tamarind water with a pinch of jaggery added to it. Sprinkle over the aubergines. You may also use lemon juice instead with some sprinkling of sugar added to it. Do not drench the aubergines. It is just to add a little extra tang.
5) Beat hung curd/greek yoghurt till creamy. Please ensure the curd is not too sour. Pour this over the brinjals.
6) Heat fresh mustard oil and temper with black mustard seeds, minced ginger, split chana/chholar dal, whole dried red chillies and some curry leaves. Once they start crackling, move it aside, let cool for a few seconds and pour over the curd, along-with the little oil that these were fried in.
7) Garnish with fresh green coriander chopped and slit green chillies.
Voila! 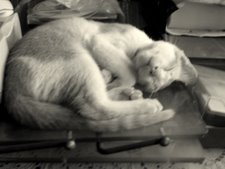